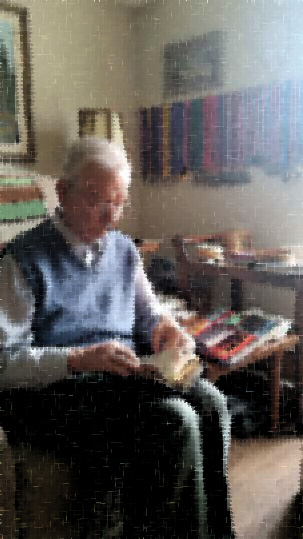 Hanging on the wall is a row of medals – medals won during his golden ‘retirement’ years as a Master’s record breaking track and field competitor in national and international competitions.  In his lap is an old folder full of weathered papers, each neatly folded protecting what was inside.  He delicately unravels each piece of paper and tells about it.

“Look, here is one of my passes that I used to travel with in Germany,” he says to me.

His Huckleberry Finn like adventures during the last months of the war included a broken down car where the only way they could start it was by lifting the front end, rotating the driver’s side tire while the car was in first gear.  He rode the rails across Germany searching for his brother.  He snuck out of a camp in the dead of night, wandered through farmer’s fields, and occasionally lived off the land.  He swapped clothes for food and food for clothes and then there were more train rides.  After the war he settled in a subdivision of a German city to work and study, graduating as a building master from its Technical College.

“What’s this?” I ask, unraveling a delicate sheet of paper with “King Neptune” written in German at the top of the page in red letters.

He laughs.  “I got that when I crossed the equator the first time on route to Australia in 1948.   They used to pull the person under the bow of the ship.  That trip they just put some tar on us and dunked us in some water on board ship.  Much more civilized.”

He pulls out old albums and a tattered box that once housed chocolates.  He takes off the lid and there are snapshots illustrating his life living in tents and working in the forests of Australia, dancing in a dance troupe where he meets his wife, followed by pictures from their wedding.

“We were.  We’d been to another wedding four weeks earlier and the guys there wagered me that if I got married in two weeks, they’d pay for all the booze.  I proposed that night. My wife and I couldn’t get the church until four weeks later, so we sent out the invitations explaining two weeks was a bit too short notice, but they were all invited to the wedding just a few weeks hence.”

“So did your friends pay for the booze?”

I see a twinkle in his eyes.  “Yes they did.  And I made our multilayered wedding cake,” he says beaming and pointing to a picture, “That’s my father-in-law stirring some of the dough.  We didn’t have mixers in those days – we had to do it all by hand.”

The next pictures are of him with his son, just a few months old and then a toddler.  He was a very happy man.

He opens another box of photos and now he’s on a ship again – this time he’s crossing the Pacific with his wife and son, his Canadian immigration papers safely hidden in his wallet.

His daughter was born a few years later and he became a Canadian citizen three days before her 3rd birthday.

He starts to pull out another box of photos and stops.

“We won’t be able to go through them all today,” he says and stands up.  He goes over to his desk and takes out an old vanilla file folder and returns to his chair.  He glosses past old report cards and his diploma from Germany and his Certificate in Business Administration from a local university.  There are numerous thank you letters that he’d received over the years for voluntary services and contributions to various organizations.  He points to the certificates from the Canadian Executive Service Organization.  He completed three projects for them.

“They paid for my travel expenses and I was able to help,” he says as he closes the folder and offers me some Werther’s caramel drops from a hand crafted wooden bowl.

“I’ve been building things for most of my life and this is all that’s left,” he says, pointing to the bowl, a lamp, a trolley and a few other small objects around the room.

“Did you work in carpentry?”

“I did some cabinet making for a short while.  I did other things.  I supervised scenic construction for TV programs; I even worked in a downhill ski resort for a year.”

“But you said you built things…”

“At home.  We didn’t have much when we arrived in Canada.  We bought a house and I built us the dining room and living room furniture.  Later I built a cottage for the family; I refinished our basement in two houses.  I built furniture for my children when they were starting out in their new homes.  Whatever was needed, I’d build or repair.  I did what I could.”

“Do you have pictures?”

“Yes, there was a time when I built a dark room in the basement and developed photographs.   That large box over there is full of them.  I used to have trays and trays full of slides too, but I got rid of them.  Everyone started wanting color photos so that’s what we did and had them developed at a store after that.”

I notice the sculpture of a girl originally molded out of clay hanging on the wall.  “That’s my daughter when she was about 15 years old. I made that.”

On another wall I notice a water-colored painting of a man.  He tells me his son painted that.

There is a picture of his family and grandchildren on the wall and two special pictures of his wife on top of his dresser.  He once told her, “We are always together, even when we are apart.”  They were married for over 60 years.  He misses her terribly.

“This is what’s left of my life,” he says looking around his tiny room in the retirement home.  I see the sadness in his eyes.  “I want to go through these boxes one more time before I throw them out.  Nobody is going to want them after I’m gone.”

I am shocked by his bluntness. “Why do you think all this will be thrown out?”

Here was a man who is two months shy of his 97th birthday and had deliberately and carefully chosen each of these token treasures from his life when moving to his final home.  The items clearly represent different facets of his character, parts of his history that allowed him to accomplish all that he had.  I’m befuddled.

He continues in a very matter of fact tone:  “I’ve given my children and grandchildren a lot of things already.   How much more of this stuff do they want?  This room is theirs to pick through after I’m gone, but all these are a part of my life story, not theirs.”

“But your photographs, your lamp, the vase, your medals…” I exclaim waving my arm around the room.

I watch him ponder the question.  Clearly there were tough times and fun times, but I also see something else.  I sense the pain he carries in his heart – not everything has turned out as he would have liked.  I’m about to change the subject when I notice a twinkle return to his eyes and he says, “I’m not ready to throw in the towel yet. It’s all good.”

This man would not want his life recognizably exposed in the media and I have tried to respect that by leaving out inquisitive facts that would solidify timelines and places – none of these define who he is.  He touched my heart which is why I wrote this piece – my gift to him.  It was a privilege to have shared a fleeting moment in time with this amazing man whose daughter calls him ‘Isa’.