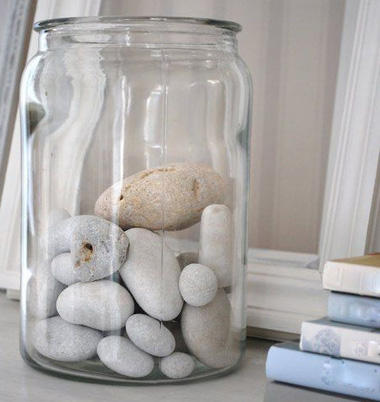 Charli Mills’ February 2, 2017 Carrot Ranch Flash Fiction challenge was to write a story about a rock in the road.

I confess the story that I thought of immediately was told or written by someone ‘unknown’.  While I was trying to find the original story, I stumbled over many articles and videos using the same or similar metaphor.  The titles varied from ‘Jar of Life’, ‘Big Rocks of Life’, ‘Priorities and a Jar’, ‘Rocks, Pebbles and Sand’, ‘Golf Balls, a Mayonnaise Jar and Coffee’, etc.  The message was the same. I am delighted to share one version of the tale with you today and keep this priceless wisdom alive.

A professor stood before his philosophy class. He slowly met the eyes of each student and finally said, “We are going to conduct an experiment today.”

From under the laminate table in front of the lecture hall, he pulled out a big glass mason jar and gently placed it in front of him.  Next, he pulled out a bag of stones.  A small murmur resonated among the students as he placed the stones in the jar one by one until there wasn’t any room to add another.

The professor lifted his gaze to his class and asked, “Is the jar full?”

Many of the students replied, “Yes.”

The professor paused for a moment.  While reaching under the table he asked, “Really?”

He pulled out a bag full of pebbles which he carefully poured into the jar, rattling the container so the pebbles could easily slip through the larger stones and settle throughout the jar.

“So tell, me,” he asked the class, “Was the jar really full when all it had was stones in it?

“Apparently not,” replied one of the students in the second row.

“Is the jar full now?” asked the professor.

There was silence in the room.  At last he heard a meek voice off the right, “No?”

“Correct.” The professor pulled out another bag.  This one was full of sand which he cautiously poured into the jar.  The sand filled in the spaces between the stones and the pebbles.

Without hesitation, the students replied, “No” in unison.

“Correct,” replied the professor.  He now reached under the table and took out two cups of steaming coffee and poured them into the jar until it was absolutely full.

The professor lifted his gaze and asked, “If this jar represents your life, what does this experiment show you?”

The young lady in the third row blurted out, “No matter how busy we think we are, we can always take on more.”

“That is one view, but eventually you will burn out,” replied the professor. “Another view is that the large stones represent the big things in your life, things that are important to you.  Set your priorities. If you don’t place them in your jar first, you’ll never have room for them later.  You’ll be just busy working small stuff, the pebbles and the sand.”

“But what about the coffee?” asked someone from the back row.

The professor smiled. “I’m glad you picked up on that.  No matter how full your life may seem, there’s always room for a cup of coffee with a friend.”

What are the Large Stones, the priorities in your Life? Put them in your Jar of Life first and don’t sweat the sand stuff. Remember, there’s always time for a cup of coffee with a friend. 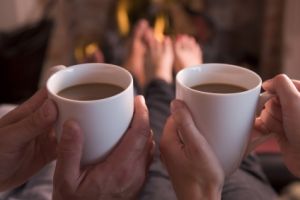 13 thoughts on “Lessons from a Jar, Rocks, Pebbles, Sand and Coffee”