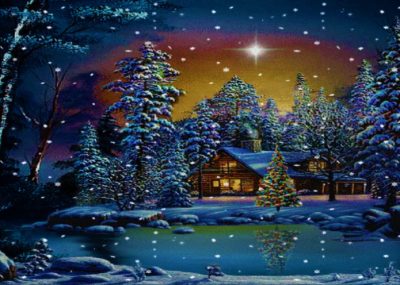 Our story begins on Christmas Eve, 1818. Joseph Mohr, a young man of humble beginnings with an aptitude for music, has settled into his role as the assistant priest for the St. Nicholas parish in Oberndorf. It’s a village north of Salzburg, situated along the Salzach River.  Until recently it had served as an important waterway for the salt trade. The Napoleonic wars (1803 -1815) had brought about a decline in the industry, leaving many in the villagers jobless and facing a troubled and uncertain future.

With the Midnight Mass only hours away, Father Mohr leaves his small room in the sacristan and walks through the snow laden streets to visit his friend Franz Gruber. He asks the local schoolmaster and church organist to compose a melody for a poem he’d written two years earlier. Gruber begins working on the composition as Father Mohr returns to the church after stopping at a local tavern for a bite to eat.

That night the two friends stand together in front of the altar and their voices ring through the church to the accompaniment of Father Mohr’s guitar. The congregation sits hushed in the candle lit nave, the gentle and reassuring final cadences of ‘Stille Nacht’ renewing their souls with hope and peace.

And in that moment, Silent Night is born.

Next year marks the 200th anniversary of this much beloved Yuletide carol. It’s one of my favorites and happens to be playing in the background while I sit by the fireside, writing this post.

Perhaps it is human nature to create legends with anecdotal components when recounting historical events. It is these details that make the stories entertaining and memorable. The story of Silent Night has lots of them, many addressing the question: why was Silent Night composed for guitar and not an organ?  It was a mystery for which many explanations have been fabricated. I found quite a few websites where historians presented their findings, discrediting the anecdotal elements. For example, there was no evidence that the organ was broken, or that church mice had eaten through the pipes. The conclusion I drew was that original arrangement was written for a guitar simply because that was the instrument of choice for Father Mohr.

Joseph Mohr was a priest who ministered to common people and had a calling to help the needy. He was born in abject poverty and when he died he was just as penniless having given all his earnings to aid the poor. His sole possession at the end was his guitar, which is now exhibited at the Silent Night Museum in Hallein.

Father Mohr had just turned 24 years of age he when wrote a six-verse poem ‘Stille Nacht, Heilige Nacht’. Two years later he was serving a different parish, but the conditions were the same. The people of the town were struggling for survival in the aftermath of a war that had changed their lives forever. I wonder if what really happened was that a selfless young 26-year-old priest simply wanted to do something special to lift the spirits of the parishioners that Christmas Eve. His friend Franz Gruber was clearly inspired by the words of the poem and composed the melody and arrangement in one afternoon.

Since that first night, the lyrics and arrangements have been enhanced, translated and modernized … but the melody and the song’s message of peace have remained the same.

We are forever richer for the gift Joseph Mohr and Franz Gruber have given us.

Here is the only rendition of Silent Night that I could find, performed with a simple guitar.

Wishing you a heartwarming and festive holiday season.